Clover Park Technical College creates a significant positive impact on the business community and generates a return on investment to its major stakeholder groups—students, taxpayers, and society.

CPTC creates value in many ways. The college plays a key role in helping students increase their employability and achieve their individual potential. It provides students with the skills they need to have a fulfilling and prosperous career.

The value of CPTC influences both the lives of students and also the county economy. The college serves a range of industries in Pierce County, supports local businesses, and benefits society as a whole in Washington from an expanded economy and improved quality of life.

During the analysis year (2014-15), CPTC and its students added $187.9 million in income to the Pierce County economy, approximately equal to 1% of the county’s total gross regional product. By comparison, this impact from the college is nearly as large as the entire Utilities industry in the region. 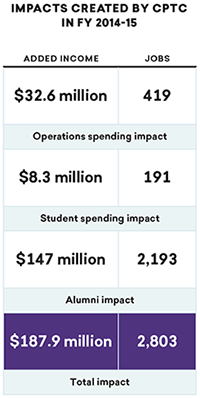 RETURN ON INVESTMENT TO STUDENTS, TAXPAYERS, AND SOCIETY 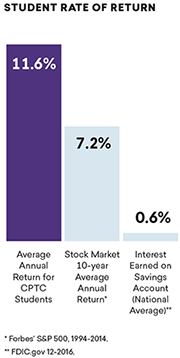 The results of this study demonstrate that CPTC creates value from multiple perspectives. The college benefits local businesses by increasing consumer spending in the county and supplying a steady flow of qualified, trained workers into the workforce. It enriches the lives of students by raising their lifetime earnings and helping them achieve their individual potential.

It benefits state and local taxpayers through increased tax receipts across the state and a reduced demand for government-supported social services. Finally, it benefits society as a whole in Washington by creating a more prosperous economy and generating a variety of savings through the improved lifestyles of students.