Copied! Copy a link to this section 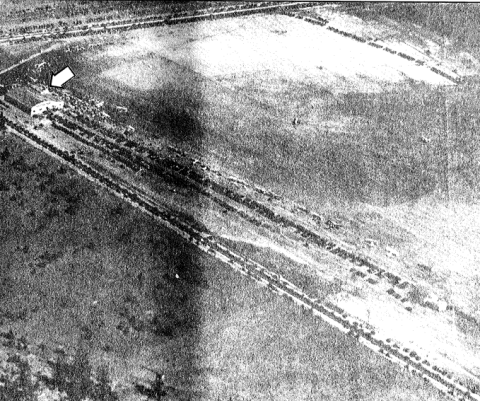 The present-day location of CPTC was used as the Tacoma Motor Speedway from 1914 to 1921, which featured such famous drivers as Eddie Rickenbacker, "Terrible" Teddy Tetzloff, and Earl Cooper.

The present-day location of CPTC was used as the Tacoma Motor Speedway from 1914 to 1921, which featured such famous drivers as Eddie Rickenbacker, "Terrible" Teddy Tetzloff, and Earl Cooper.

Additionally, other instructors—names unknown—trained 2,500 persons for the Tacoma Shipyards in shipfitting, blueprint reading, and welding.

Thus began the history of Clover Park Technical College, and 70 years of staff and faculty excellence.

Post-war economic growth, baby-boomers, and rock-n-roll ushered in the 1950s. CPTC was a fledgling vocational technical institute, but growing rapidly. In 1951, the federal government was phasing out the Navy Supply Depot (the current site of CPTC), and the Clover Park School District was granted approximately 130 acres. Although the school district occupied most of the seven concrete block buildings (which included the steam plant with underground power and heating designed to withstand aerial bombings anticipated during World War II), the school district soon moved to other locations in Lakewood. The vision for CPVTI was coming together.

Also in 1957, a small grant was received – enough to purchase books, films, and pamphlets to create the resource center, staffed by the first vocational-technical librarian, Barbara Reid. 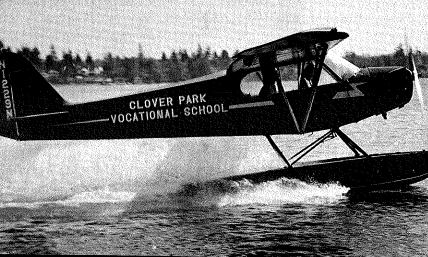 One of the school's J-3 Piper Club trainers takes off from the American Lake flight training center, 1953.

One of the school's J-3 Piper Club trainers takes off from the American Lake flight training center, 1953.

And in the late 1950s the VTI began operations of its first student-operated TV and radio stations, under the guidance of instructors Tex Turner, Frank Jensen, Al Brevik, and Alex Crewdson.

The 60s was a decade of turbulence, growth and change, and Clover Park Vocational-Technical Institute was not immune. By 1961 all of the original buildings of the old Navy base were completely occupied, and there was a great need for new buildings, remodeled buildings, and portables. Training programs were being created at a steady pace. With the enactment of the National Defense Education Act, the VTI was given a new financial base from which to begin expansion.

Because of the NDEA, the LPN program was created and taught by the first female VTI instructor, Edna Lyda, RN. Another first – not only for the VTI but for the state as well, was the Computer Programmer and Data Processing Equipment Operator program, taught by Pat Mailey. Additionally, NDEA helped fund the first Certified Lab Technician program in the state, taught by Ann Leman.

Turbulence engulfed the state’s voc-tech institutes and community colleges, as a movement emerged in 1967 to form a separate state system for post-secondary institutions. The bill that was adopted allowed the boards of directors of local school districts to release their VTIs to the newly formed community college system, if they so desired. Clover Park School District retained Clover Park Vocational-Technical Institute, and it was kept separate from the plans for the Clover Park Community College (which later became Ft. Steilacoom Community College, and then Pierce College). Editor’s note: Wise decision for us future CPTC employees!

At the end of the decade, CPVTI set a record of starting 16 new programs in one year, with the dedicated and qualified faculty and staff from business and industry. What an accomplishment! The variety and quality of vocational opportunities at Clover Park Vocational-Technical Institute became a model for the state of Washington, and a model of single-purpose vocational-technical institutions for the entire nation.

By 1970, there were 90 full-time faculty members, and CPVTI continued to experience growing pains with the new start-ups. Since there was no annual funding limit from state financing for vocational education, as long as space could be secured to house the programs, the heat was on to find adequate housing. The VTI began extensive use of portables, thus creating “Portable Row”, as well as securing off-campus facilities. The Bowling Maintenance Mechanic program (Bernie Jeffries, instructor) was located at Western State Hospital. The old DuPont High School became home to the Marine Mechanic program (taught by Donald Auburn). The Home and Family Life program (Carol Mooney, instructor) was housed at Lake Louise Elementary School. 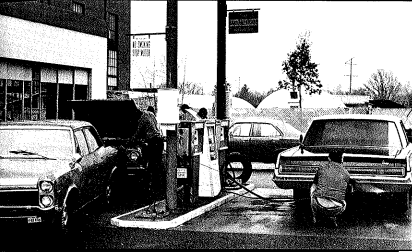 The Service Station Car Care training center in the 1970s

In 1977, a two-location building project was completed. The new Automotive Service and Sales Center opened (instructor Curt Christensen), as did the new Resource Center (in the current location of Building 15). The Resource Center housed not only the library, but the Teacher Aide program (Martha Cookson, instructor), Library Technician program (Ida Kelsey, instructor), and Food Service program (Willie Little, instructor).

The 80s was the decade of the building boom; in the 90s we left the Clover Park School District and went out on our own to become Clover Park Technical College; and today we persevered through an unprecedented economic downturn. But we remained strong and committed to excellence. New buildings, new programs, new ideas. Accreditation. Clock hour to credit. Local, national, and international partnerships. These are just a few of the milestones that many of us have witnessed, and have worked hard to accomplish.

In 2000, CPTC finished and occupied a campus in South Hill, just south of Puyallup. Our aviation and aeronautical programs are now housed at this campus and make use of the runway at Thun Field.